A big thank you from Haiti 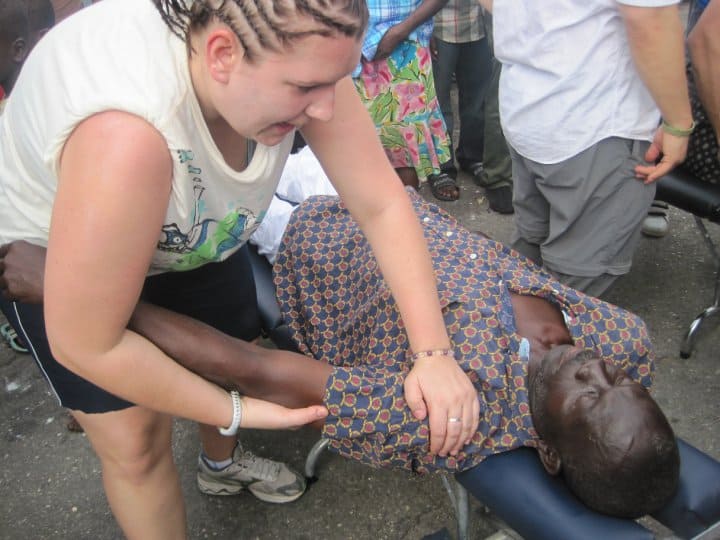 Most of you know I recently went on a Mission-Chiropractic trip to Haiti. It was truly life changing for me. The trip was lead by Dr. Peter Morgan who practices not only in NY but all over the world by traveling to third world countries. His focus has recently become Haiti. He has a Haitian patient who drives a cab in NY and sends money back to his family in Haiti. Two days after the earthquake Dr. Morgan took his patient, Surrell, and went to Haiti for relief work. What they arrived to find is that because Surrell, as poor as we would see his life to be was considered wealthy Haitian standards, found children being left at his home after they lost their parents in the Earthquake because the community knew they’d have the best chance to be fed there.

Four months later Surrell and his wife Sheila’s home is now a make shift Chiropractic Orphanage thanks to Dr. Peter Morgan. During this mission we stayed in tents on the roof of this orphanage/house and was gifted the pleasure to spend time loving on the kids. Each day we went out into the tent cities and hospitals adjusting people and came home each night greeted with hundreds of little angel smiles. These babies taught me a lot about myself. Until last month, I didn’t know that I could much love this much, and that this much love even existed.

Only small individual self funded organizations like ours seem to be present there, we saw no red cross, no habitat for humanity – we only ran into many other missionaries and volunteer health care workers….

I put this video together as a big thank you for all of for your donations and help with the mission-chiropractic trip.
http://www.youtube.com/watch?v=kowO-P4Zey8

When we adjusted the people their eyes literally lite up and some even raised their hands in glory when they could feel the immediate relief on their bodies. It was so beautiful and I took home way more from Haiti than any of the material items we left.

I learned a bit of the History of Haiti that I feel strongly needs to be shared – the island consists of people who were brought over by the French as slaves from Africa. The salves quickly out numbered the French and revolted. The French jumped ship and went to New Orleans leaving the Haitian people with no education, no infrastructure, and in some areas poor soil that does not farm. The French later demand Haiti buy it’s freedom from them affecting Haiti’s economy for the next 100 years…..Then the earth quake of Jan 12th 2010 came to devastate a country that already had a hard time feeding it’s people. That was the hardest to see, hungry dehydrated babies living in tents and filth.

It has only been a few months since the Earthquake and they are still in need of so much help. They can not be forgotten. I assure you the money donated to large organizations is not reaching the people in need. There was little to no Red Cross presence, only small volunteer groups there. Please help us continue to raise money and items for the orphanage at my website:
www.DrTeneshaWeine.com
or
www.Mission-Chiropractic.com

But, I don’t feel giving just hand outs is enough nor is adopting babies and taking them away from all they know – I feel we have to educate and help them build a means for survival. With that said, I will be going back this fall on another mission trip to the same orphanage, continuing to help them to rebuild a school there.

A story you may have heard held very true for me in Haiti:
A little boy is walking on the beach – while there are hundreds & hundreds of starfish stranded on the sands and can not make it back to the water. The small boy reaches down to pick up a starfish and throws it back in the ocean. An older man happens upon this sight, and asks the child: “What are you doing? You can not possibly save them all!?!” To which the small boy replies, “I may not be able to save them all… but to this one… it makes a world of difference”.

Looking at the country as a whole leaves a feeling of how can we ever help – but looking at the one orphanage we adopted through Chiropractic makes me feel hopeful we can give a better life to those 100 plus kiddos.